Sam Leach turns convention on its head.  I am talking here about the gallery space here as he has taken the upstairs space, which totally throws the heuristic I had developed for the higher profile artist taking the downstairs at Sullivan & Strumpf.  His new show, Dymaxion, just opened today and runs until 8 June. I tagged along as I was quite keen to hear the artist in conversation with Andrew Frost. 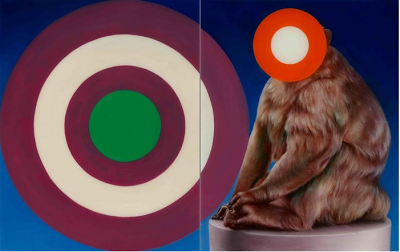 It was an interesting discussion, and always great to hear an artist speak about their body of work as it puts it in context.  Andrew Frost was a pretty decent interviewer and didn't miss the opportunity to plug his upcoming telly show, don't worry we'll have a look at that in due course. What did I learn? Well for starters Sam Leach is yet another artist doing a PhD.  His thesis has a really snappy title but I totally failed at remembering it.  I  am reliably informed a video of the interview will go up on the SSFA website at some stage although its not up yet.  What else?  Well this show started out after Sam took a commission where the patron wanted him to work in some circular targets referencing Jasper Johns.  I love a random commission.  Sam how about a country rugby league logo?  I am thinking the Cessnock Goannas for you!  Anyway onto the work.  I love how Leach mixes up the classical images and the futuristic, or even the retro futuristic, in his work.  The sharp photorealistic painting style combined with the shiny resin finishes look very slick and very hard to paint!  So top marks for skill.  The big bopper in this show is 'Sebeok on Safari' which contains 24 panels of 50 x 50cm for a total of 2m x 3m overall.  It was totes amazeballs both up close and from a distance.  Actually all the large scale works are quite awe inspiring, I think it is because of the technique.  Despite this, I do prefer his smaller works, remember he won the Archibald and the Wynne with very small works (for those prizes anyway).  Luckily for me my top pick 'Van Dalem in Dymaxion' (image at top) had sold.  This was 3 smaller panels and replicated the dymaxion map by Buckminster Fuller that gave the show its title.  This map is a way of cutting the globe and showing the world without the prejudice of north / south etc.  It is an interesting concept and strangely enough one I was familiar with as the ivy league uni I went to in the US had a massive Gall-Peters equal area cylindrical map on a double story wall in one of the buildings (if you didn't know the standard Mercator projection is totally biased towards Europe, it gives it 2/3 the whole map when it takes up 1/3, it's why Greenland looks huge on most maps). Anyway, enough with the cartography. I also liked the 'Baldessari Tribute Monkey' (above) which shows the use of the targets to great effect.  These works don't seem to photograph that well and they are amazing in person so you'll just have to get down and see for yourself.  I'll also tweet a photo of the side of the works which shows the resin dripping down (you can kind of see it on the image below), it is a very cool process and one I'd love to try. 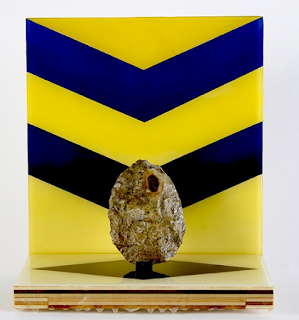 Points:  3 to the Dymaxion map, 2 points to the hugeness of the safari work and I will give 1 point to 'Stone Tool C' (above).  It was a smaller work that also incorporated some of this tools that he did in the last show.  Is this just me or does it also look like some kind of retro-futuristic Parramatta Eels insignia?  C'mon Sam, the CRL baby, get on board!
Posted by Big Lamington at 11:30 PM