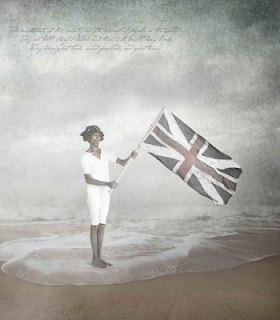 Debil Debil opened in April and runs all the way through to 8 June so you have plenty of time to get down to Anna Schwartz's gallery at Carriageworks and see this group show.  The show, curated by a leading Aboriginal scholar Prof. Marcia Langton, takes as its reference point the Tracey Moffatt film beDevil.  It is 20 years since this was released and the Professor has collected a diverse body of work from other contemporary aboriginal artists that I expected was going to be full of ghosts.  However from what I can make of the accompanying essay, the show really references history (but that is perhaps due to my definition of ghosts being the stricter Scooby Doo sense of 'actual' ghosts rather than 'ghosts of our past'). 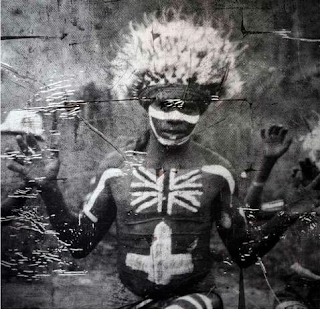 So lots of big names here.  Daniel Boyd, Christian Thompson, Brook Andrew, Gordon Bennett, Danie Mellor, Tracey Moffatt and Darren Siwes have all probably been mentioned on Big Lamington before.  It was nice to see Michael Cook's work in the flesh as I think my previous experience had been glossy adverts in art magazines.  His series of 'Civilised' works were I guess quite 'haunting' in their soft focus but then again I was searching for ghosts!  I was here with just one of my junior collectors who was quite taken by the tall bronze totem pole type sculptures of Nawurapu Wunungmurra.  My favourites were probably the photographic works.  I did like Darren Siwes take of the royal family.  His collection of 3 works 'Gudjerie Kwin', 'Jingli Kwin' and 'Northie Kwin' were eye catching, if a little off-putting at the same time.  I would have liked to have known more about the artists intentions with these.  Christian Thompson had some great photos included, all told I liked the ones where he hides his face the best (like his previous series that he did with native flowers).  Top pick was probably 'Invaded Dreams' (below) although I am not sure if there is any intended significance of the choice of the Mary Rose as the ship in the image.  Perhaps the historian in me is looking for too much significance here, given Christian is using a modern union jack on Henry VIII's flagship (i.e. circa 1500s).  Danie Mellor has a great big scene of his signature illustrations on a blue and white background.  It looked great and I bet it would cost a packet to take this 300x360cm work home with you.  Brook Andrew had contributed some mostly black and white prints.  I am not sure of his technique but they look to me like a vintage image is altered and then printed on the fabric.  Despite the antique look I am guessing there is some digital in this process.  However he did these 'mixed media on belgian linen' works they look sharp. 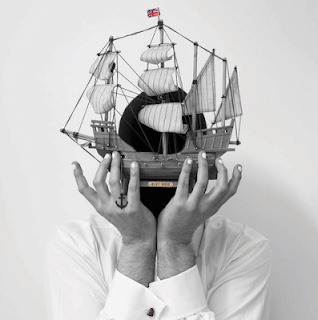 Points:  I am going to run with my own theme for the points today.  All these artists are working some Union Jack action into their pieces.  3 to points to Brook Andrew's 'Time VI' (middle).  2 points to Michael Cook 'Civilised #11' (top) and 1 point to Christian Thompson's 'Invaded Dreams'.

Posted by Big Lamington at 9:00 PM