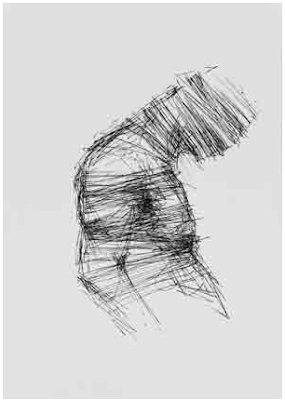 How good is this?  Anonymous until sold.  I felt like I was at some special art quiz ... trying to guess who did what.  This is the (first) annual 4A fundraiser that gets artists to submit a work on A4 paper and then the gallery sells them anonymously for $200 a piece.  With 200 artists volunteering that is a cool $40k that should fill 4A's coffers and help them put on some more great shows in 2014.  How did we go on the guessing game ... 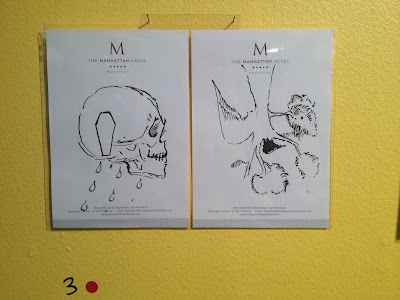 So 4A had these big boards up and when the work was sold they added the number and the artists name.  For example, in the above photo they would add "3.  Shaun Gladwell" and then the punters would then go and have a look at it and nod 'oh yes, Shaun Gladwell'!  Some artists were immediately recognisable due to their signature styles, Jasper Knight, Reuben Paterson and Vernon Ah Kee (image top).  They were also amongst the first works purchased on the night.  I also worked out the Tony Albert and the Deborah Kelly before they were outed (Deborah Kelly was the answer to the anonymous artwork I twittered on the night).  I think 4A said they sold over 120 works on the night so are over half way to their fundraising goal.  The show is on at the gallery until the end of November and you can even buy works online here.  There are still a couple of works I am interested to know the artist of, and when I left Ken + Julia Yonetani's work was still anonymous.  Definitely swing by and check it out if you can.  I think this will get bigger and bigger.  On opening night there was a line around the corner.  Not yet like the Royal College of Art anonymous postcard show in the UK where they camp out overnight (seriously, I have had a friend do this).

Points:  Really every contributing artist should be acknowledged, and 4A does this on their website here.  3 points to Vernon Ah Kee whose drawing lost nothing constrained to the size of A4.  2 points to Tony Albert who had a great card collage in the show and was spotted helping out even further by collecting some anonymous works on the night.  1 point should go to the MC on the night, Sunil Badami who worked the room and even had a great little A4 work of his own included.  He also introduced me to the word flaneur, which I think I need to add to my job description ...
Posted by Big Lamington at 1:16 PM