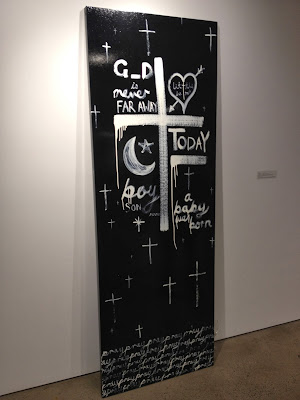 2013 and the Blake Prize tries its third venue in 3 years.  Maybe one of the organisers reads the Big Lamington? I was refreshing my memory of what this gave us last year and I see I wasn't a fan of the entry price at the SH Ervin.  This year the big show came to COFA (aka the College of Fine Art, aka the old Paddington High School!) and I swung by on the way home to check out the opening night. That was 17 Oct so sadly you can no longer see this in the flesh but the show lives eternally online here (okay, bad spiritual gag, I'll try harder). 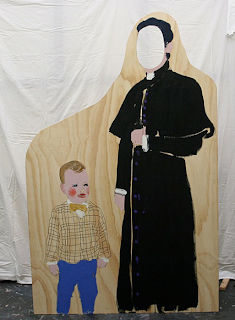 Opening night was quite a bit of fun, especially as I had the pleasure of spoiling the announcement ceremony.  I was looking at my twitter whilst on the bus over to COFA and the abc had tweeted Trevor Nickolls had won the main prize bang on 6pm so I was surprised when I finally got to the venue to see all these people lined up for the speeches.  I recognised someone from Artereal, a gallery with quite a few artists included, what was going on and apparently the crowd was waiting for the announcement. Apologies Rihanna for blowing the suspense! Anyhow, that saved me having to listen to some of the worthies who were primed to go on for far, far too long. Even Leichardt Council is involved!  Heaven help those ratepayers.  Inside was a familiar scene.  A lot of works taking a fairly long bow with the approach to the spiritual.  Not as many familiar faces for me this year.  Nell, Liam Benson and Joan Ross were about the only artists I could recognise without the aid of the catalogue this year.  I did pick Paul Ryan's entry but had read about this earlier in SMH (image above).  Nell's was probably the most 'spiritual' for me, celebrating childbirth in her signature black and white style (image top).  Liam's Santa was very clever (and was similar to his performance at Sydney Contemporary) and does look a little god-like (as in Neptune) but is probably a little secular for me given the aims of this prize.  Likewise Joan Ross' video where 'the underlying message suggests the spiritual connection to the land' reads more like a contorted rationale to get an already existing work to somehow qualify for this prize. I have read about David Capra before and it was great to see his installation of banners and video ("Year of Jubliee" image below) which really did bring to mind the banners you see in Church.  And I love a good hand made banner or flag.  David also won the emerging artist award here.  Other notables included Greg Semu's quite dark 'head of john the baptist' which connected matyrdom to headhunting no less!  This also won the people's choice.  Another highlight was Kate Just, whose 'postscript: burial suit' was a photo of Kate wearing a handknitted bright pink burial suit with motifs from her life (she also has a handy website and you can see the burial suit there).

Points:  3 to Nell for the slab of pine. Quite spiritual and iconic. I have a real soft spot the signature style of this artist.  2 to David Capra for the banners.  I think I will give 1 point to Kate's knitted burial suit which had a great Easter Show craftiness to it as well as being right out there in conceptual terms.
Posted by Big Lamington at 1:14 PM