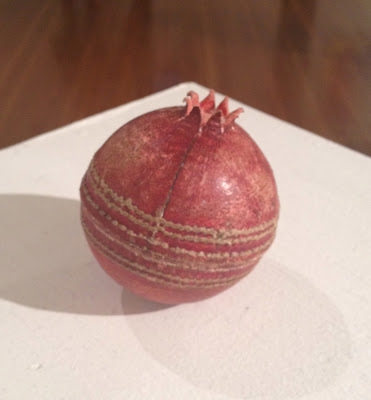 So it's November which is the season for art school grad shows.  I am not sure that CONTINUUM at COFAspace is the official postgrad show but hey they sent out a tweet and I came running (or at least swung by after work on the way home).

COFAspace for those that don't know their way around the old Paddington High School is tucked into the ground floor of building E.  Where exactly is that? Well you would expect that there might be a sign if they want some outsiders to turn up.  You would be wrong.  Anyway I did find it eventually and helped myself to the floor sheet.  First interesting discovery, Rebeccah Dent is the only artist trying to sell her works in this show.  I don't know why more aren't trying.  I would've been interested in Abdullah Syed's 'bomegranate" (top) which was an expertly upcycled cricket ball.  Enjoyed seeing a reference to the west papuan freedom movement (Melinda Sloan's 'Papua Merdeka'), although I thought it was a bit too dark (check my tweeter stream for an image of this).  This show also included 'alumni research' which potentially explains Louis Pratt's quite polished entry "what ever" (below).  Louis actually got his Masters from COFA back in 2004 and was a finalist in the Wynne last year and is also in this years Woollahra small sculpture prize.  An interesting start to the art school show season.  Will try and get to the National Art School's postgrad show before it closes this Saturday. 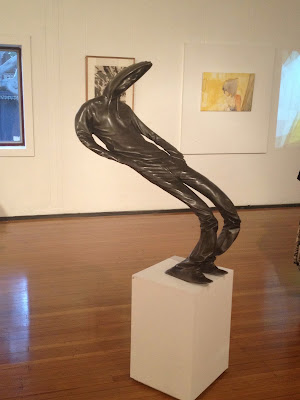 Points:  3 to Abdullah Syed's improvised six stitcher.  Loved it.  2 to Louis Pratt for his far too polished for a grad show sculpture and 1 point to Rebeccah Dent for her 'Dissymetry' collage works on paper (although I don't think her pricing had extended to these works).
Posted by Big Lamington at 5:14 AM