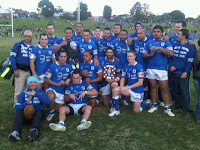 Inspired by the recent State of Origin I had arranged to meet a few mates over at heavenly Henson Park to take in some league action as the Newtown Jets were hosting my very own Bears for some NSW Cup action. Given this was my first trip out to Marrickville I decided to squeeze in a couple of galleries before kick-off.

Courtesy of one of the maps from the art month sydney website (which was in March but the website still works, gots to love the intrawebs!) I was able to plan a walking tour between ESP gallery, Factory 49 and the Henson Park Hotel. These galleries are both not for profit artist run initiatives. ESP had a group show starting - opening was Saturday at 4pm. Umm, what about the clash with the Jets home game? And they say the arts isn't trying to be elitist! The ESP show was a real mixed bag, everything under $1,000 and it would've wanted to be. I didn't mind Will Coles' cement casts of skulls but that was about it. Factory 49 was a bit more interesting. A partially converted warehouse (I don't know if it ever was a real factory but it probably sounds cooler), they had an interesting installation by Amarie Bergman in the main room. This was a big letter H made in softwall (like a big room divider made from that really tough tyvek paper). Unintentionally funny was that I kept setting off the beeper that let the office know someone was in there as I walked around it, perhaps that was part of the piece. In the office they had some works of Kate Mackay which didn't do all that much for me, although researching her online I would have liked to see her Room Cubed installation from last October. 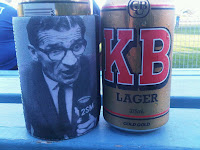 Points - 3 to the Jets (pictured above with the Frank Hyde shield), a great day had out there. They really turn the clock back with an excellent atmosphere and I managed to pick up a limited edition stubby holder to add to the big lamington collection! 2 to Factory 49, a promising space just around the corner from the pub and the back gate to Henson Park, they should come up with a game day promo to get some more punters through the gallery before kick-off. 1 to ESP.
Posted by Big Lamington at 5:17 AM