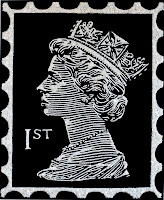 It is interesting where you learn about new artists: going to galleries and museums, reading magazines, and occasionally reality television. One of our favourite shows of 2010 was this crazy show called Nine by Design which followed two interior decorators who have 7 kids (and here we are complaining 3 is tough!) and build these amazing houses in New York which have really cool interiors. Anyway, one artist that they had a few pieces of was Ann Carrington. My wife adored her 'Pearly Queens' where Ann has appropriated the famous visage of the Queen from the Royal Mail stamps and done them in pearl buttons sewn onto canvas.

After a little bit of sleuthing we found Ann's website and were able to commission our own pearly queen. Unsurprisingly this image has been a hit and echoing David Frazer (who reckons he could make a living of just one of his prints), Ann has quite a few Pearly Queens out there. As a result she gives them all unique locales to reign over, apparently like the actual Pearly Kings and Queens of London fundraising (the image above is the Pearly Queen of Bow from her website). We had given Ann a few suggestions as this was something to remind my wife of her English grandparents and so ours is the Pearly Queen of Basil Street after a favourite haunt of theirs in Knightsbridge.
Points - 3 to Ann for an amazing work. Looks great on the TV and even better in person. 2 to the Mrs for organising it all. I was quite impressed when I arrived home one day to find a huge packing crate waiting near the front door. 1 point for Bob and Cortney for the referral, their book is pretty good too.
Posted by Big Lamington at 6:25 AM