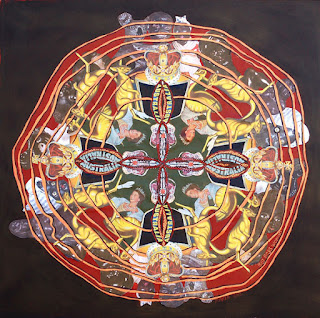 There is a great collage show on at Cross Art Projects and you've only got 2 days left! I nearly didn't make it myself as they only roll Thursday through Saturday and I had walked past here about three times when it was closed (they happen to be on the same lane as one of my favourite lunch spots, Wilbur's Place). So after taking down the corned beef special at Wilbur's last Friday I was finally able to tiptoe into Cross Arts and see this up close. They (or someone else clever) have coined the word Feminage for this show of feminist collage, which I guess it is given all the artists are women (but does that make the art feminist? Too hard for me to answer - and I did take women's studies back in the day, how enlightened!)

Anyhoo, I love a good group show as it is a great way to be exposed to a number of artists. And this show was chock a block full of familiar names I hadn't seen. Deborah Kelly? I am on GBK's mail list but hadn't seen her show (although sufficiently inspired I did check that out which I will get to in another post). Paula do Prado? Yes, I was familiar with her work from Gallerysmith's propaganda but again hadn't made it down to Melbourne to see any of her shows. Tai Snaith? She had popped up on my radar due to her publishing an arty kids book, so was keen to see her in a gallery. I liked Deborah Kelly's 'A Whistling Women' and 'Crowing Hen', these are big faces all covered with hair from what I guess is shampoo adverts. It it quite animalistic and very glossy / shiny, and in a strange way made me think of the early 80s Beast Man (one of the bad guys from the He-Man cartoons, I presume I was one of the few viewers to make that link). I really liked to Karla Dickens' Big Boss Woman (pictured above) which was full of Australian and colonial iconography in a kind of mandala pattern. This would look great next to Liam Benson's coat of arms (separately, she also has a couple of nice works in the AGNSW at the moment). Paula do Prado's collages were made with vintage porno mags that she had then embellished with patterns and beading, the whole body of work was called 'Sepiasiren'. I really liked these, it has an exotic boogie nights feel. They were quite small works (24 x 33cm) and very affordable, although a few were probably a little too explicit to make it back to our place given we utilise kids walls liberally (we can live with topless but full frontal is a bridge too far). She also has done a zine (I think this could be the first zine I've seen) which provides a lot of context to her exploration of race, gender and sexuality a la Kara Walker (who is quoted in the zine, we have her book from the Peter Norton project). On this form, and having regard to some of the work she has done at Gallerysmith I am surprised she doesn't have a Sydney gallery representing her. Tai Snaith had elected to put about a dozen pieces all together in a single work called Women vs Wild, which works in a museum type of way but makes it more of a difficult proposition commercially (so lucky Cross Arts is a not for profit). There were certain individual pieces included that I preferred, such as the lady covered in snakes, so would keep an eye out for her future shows.

Points: I will give the 3 to Karla Dickens, I thought it was quite a timely image given the recent diamond jubilee. 2 points will go to Paula do Prado for her racy collages, I would've liked to add one of these to the Big Lamington collection but my preferred choice already had the half sticker attached (which is always the way when you go to a show late in the piece). 1 point to Tai Snaith, I will have to see if we can add her book to the junior critics reference library.
Posted by Big Lamington at 4:46 PM