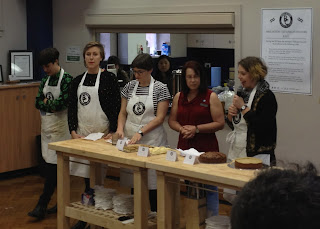 So we were back at CWA HQ to watch one of the gun CWA cookery judges, Alison Mutton, do the honours with the output of Brown Council's 90 hours in the kitchen. They had actually made all 137 cakes, which is kind of an achievement in itself. So what did the judge have to say about all this?

Having sat through a few baking judging sessions in years past I did wonder how long this would take. Alison had been allotted one hour but that would prove to be too short as even by taking a few shortcuts and not cutting and tasting everything she was still probably going strong after two hours. First up were the cakes. Plenty eliminated after looks alone, then we got down to business by cutting which reveals a few secrets, a cherry cake was discarded as all the glace cherries had sunk to the bottom of the mix, a neopolitan cake was out of contention because the line of plain cake and strawberry cake wasn't straight. As Alison said it is easy to be critical when you are looking for faults. If you type in #bcmassaction on twitter you can read some funny tweets from those present. Quite a few in the arts world were likening Alison's quick and speedily subjective dismissals to arts grant funding. But it always does depend on the judge, and you can usually pick up some good tips if you do like Tony Albert says and pay attention. My sentimental favourites, the Lamingtons, made the final four of the cake section but lost out to a butterscotch cake. My own concentration started to flag after this and whilst scones won in the final category (Loaves, Bread, Scones and Muffins) I can't really recall what took out the podium in the fruit cake section or biscuits and slices (you'll have to check Brown Council's website when it is updated) 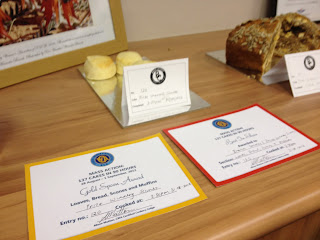 After judging it was straight into afternoon tea. You could buy the bigger cakes for a $5 donation but it was a free for all for the smaller cakes and biscuits. I made a beeline straight for the small lamingtons and was soon agreeing with the judge on its strong showing. I then sniffed around the winners and was heartened to see they had done some very nice certificates for the winners in each section. No ribbons, which was a little disappointing, but there had been so much attention to detail on this project I will forgive them that small oversight (and to be honest maybe ribbons is only a country show thing, I am not sure what the CWA / Land cooking contest hands out). I will give a thumbs up for the cherry cake, this had suffered in the judging but was lovely to eat. Then I was on the hunt for a cake to take home. I did like the look of the moist coconut cake with the icing that was 'too pink' for the judging but given one of the Big Lamington editorial board is not really a coconut fan (I know, I can't explain it either) I was on the look out for something else and, after being pipped by some lucky punter for the peach blossom cake, settled for the nice looking Neopolitan cake I had seen judged earlier (photo below, technically also a 'new acquisition' for the collection which gives another meaning to the phrase 'consuming art'). But in a twist nearly as ironic as some of the jumpers being rocked by the art school crowd (seriously, google image "ironic jumper" and you have nailed the wardrobe choice of at least 10% of the attendees here, a particularly striking red alpine number with snowflakes and a natty halloween special with pumpkins come to mind) there is actually coconut tucked away in this bad boy too, however my coconut disliking partner tried it and gave it the thumbs up. 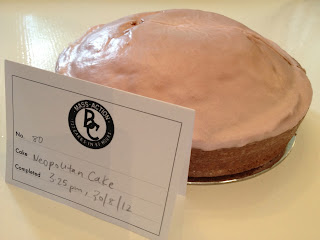 Points: I cannot argue with Alison, 3 points to the scones. It is so absolutely fitting that for an organisation like the CWA the scones get the best in show. I am big into aussie icons so 2 points will go to 'Lamington 1' (there were 2 different entries in the cookbook). These were the smaller ones and I loved their icing, I may even have to amend my recipe. I will give 1 point to the Neopolitan Cake which was lauded as "delicious" by my three junior art critics later that afternoon in a separate performance piece entitled "crumbs on the floor, who made them?".

A huge highly commended ribbon to Brown Council on this. My favourite CWA / Art world interaction was this one reported on their website ...
CWA member: "What is this? Is it judges training?"
Brown Council: "No, it's an art work. It's a performance."
CWA member: "It is not! Is it?"
If I could answer that question now I would say that not only is it art, it is one of the best things I have seen all year.