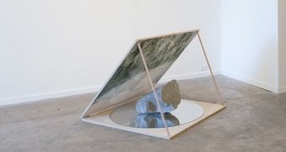 With the three junior critics in tow it was going to be all too hard to do the east sydney gallery walk or the SSFA artist talk so with half a loaf of stale bread in the car it was off to Chippendale for the 2-for-1 deal that is MOP Projects and Galerie Pompom. The artist run space and the commercial gallery from the same folks essentially share the same premises although this is the my first time to MOP since Pompon's opening.  The stale bread, if you were wondering, wasn't for the emerging artists but for the ducks at Lake Northam (in that random park near Sydney uni). This is the kind of collective bargaining we do here at Big Lamington to sneak some culture into a family outing. 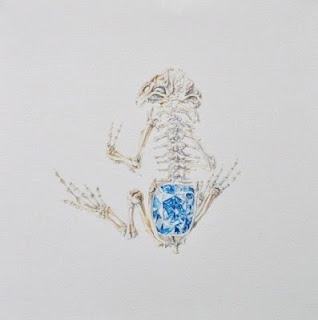 First up was MOP which has a rather convoluted title for quite a well put together show, 'Photo-sculpture, pictures, objects and paradox'.  Everyone in here (and they are all female artists so I wonder if it is feminist photography? just kidding) was essentially trying to do something tricky with photos, or "getting beyond the medium's burden of depiction" according to the accompanying essay. For a photo show there is quite a lot of stuff for a couple of unsupervised under 5s to knock over, so it was a bit of a rushed viewing, let's just hit what I thought were the highlights. Gemma Messih's "I've only just realised how important you are (to me)" was one work that lived up to a great title. This was (as I learnt later) a found photo of what looked to me like the Matterhorn block mounted and leaning on a pile of large blue metal stones. I thought it was pretty clever and the junior critics agreed. They were dead keen on seeing Marian Tubb's video work which was perched delicately on a pedestal looking up at a big green glass flask.  From the looks of it this was some type of performance where the water dripped on the artist or some such. I was much more interested in her digital prints on silk which were draped over glass although I needed a little more pondering time to actually decipher what was going on there. I really liked Criena Court's 'Proposal 7 (film still)'. I have been stalking following Criena since I saw her postgrad show in 2010. This current work is quite similar to that body of work, using plywood constructions and mirrors to play with images in reflection (photo top, and detail below). I like how the angle of the construction inverts the image from above so you get the photo right side up in the mirror. I cannot exactly say what the big rock was doing there, but I didn't mind the effect it made in breaking up the pattern of the photo and its reflection. I am not sure I would go as far to say that the stone affirmed the works "immediate tangibility as an object in the world" as some have. I would like to go to the art talk next Saturday and ask myself but have a prior engagement. Next door Pompom has Rochelle Haley's show Dead Precious. These very affordable watercolours on paper depict mainly faceted gemstones (and very well too, great geometry on show) whilst a number combine the gemstones with an animal skeleton in a clever, almost faux taxidermy way (I was getting a few Julia DeVille vibes here). There were a couple of birds, a couple of tortoises, a couple of frogs and my sons favourite, a snake with 2 peridots in its belly. I preferred the "stones and bones" to just the stones (the skeletons giving the bling a little bit of memento mori) although my girls preferred the jewels sans animal skeletons but that just may be the influence of Disney in their aesthetic. 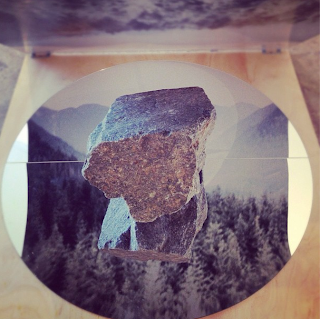 Points: 3 for Criena Court's 'Proposal 7', I am really digging the mysteriousness of her work, if it is a film still I want to put that film on my quickflix queue. Her style is quite unique and if I had a place for one of these plywood constructions would be getting in touch tout de suite, maybe I need to think of something smaller. 2 points will go to Rochelle Haley, if I had to pick just one I would probably go for a frog (pictured in the middle is 'Blue Hope') as the stone sits in its belly better than it does in the snake! 1 point will go to Gemma for what I like to term the rocky Matterhorn installation.
Posted by Big Lamington at 11:43 PM