Sylvester and Macintyre at Sullivan and Strumpf - 29 September 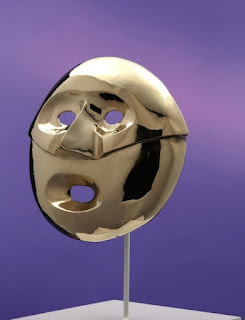 With my most junior of art critics in tow we had a quick pop-in at Sullivan and Strumpf to see the Darren Sylvester and Alisdair Macintrye shows.  This has still got another week to run and there are quite a few available works so get along if interested.

First up was Darren in the ground floor gallery.  As well as the oversize photos (120 x 160cm) you'd be expecting he has a couple of bronze mask sculptures and a dirty big space blanket (really).  The photos have a similar staged looked to his previous work but this time around there is this spiral effect that has been superimposed that is meant to be some type of subconscious thought but made me think of a Duran Duran video clip.  Which is to say cool but with a retro aesthetic.  On to the masks.  They had a real raiders of the lost ark feel, remember that golden idol at the start?  All the gallery needed was a giant rock rolling down the stairs!  I preferred the round one ("Hisamitsu Lifecella", pictured top) and it even looked a little pre-columbian.  Turns out it is based on some Japanese pharma company's (Hisamitsu) cosmaceutical mask and not Spielberg's treasure hunter.  The photos and sculptures were all editions of 5 (3 + 2 APs).  So that is like 30 photos and 20 sculptures up for grabs, which is quite a lot of stock and I only counted 5 red dots which suggests to me that I wasn't the only one who thought Darren's prices were a little too futuristic.  I mean I liked the masks but I wouldn't be able to stretch $14k for an edition. I didn't really get the space blanket, so I turned to Anthony Carew's review you can access from the SSFA site. Wow. That is one elaborate review and, save a couple of glaring typos, an interesting read. I still don't really get the space blanket as art, but I know a lot more about DuPont.

Upstairs Alisdair's dioramas combined star wars with art history references.  I think the universe of punters who (a) really go for star wars, (b) could recognise (or appreciate) the renaissance art being parodied and (c) were willing to drop some quite large sums on it, would be a very interesting crew to have dinner with.  I liked the star wars references but my inability to pick any of the sources made me think the clever joke here was just a little too hard to get.  I even got the senior critic here, complete with a Masters in renaissance art, to look online and she didn't recognise any of the scenes, but then again she calls it 'space wars' so was probably put off by the mattelness of the models.  This has been getting a lot of press, journo's thinking the lucasfilm angle will tempt the punters into a gallery.  Back on to my point (c) above, all of the red dots appear to be on the more affordable works here (c. $5k).  I mean, I would love one of these, they are fun, a little kitschy and culturally iconic, but there is no way my acquisitions committee would let me part with the funds required (north of $10k) for some of the larger pieces. 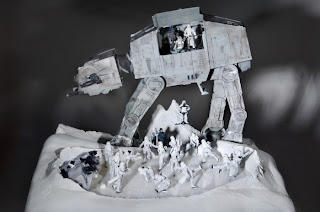 Points:  3 for the Lifecella mask, really liked it and it is even better not against a purple backdrop.  2 points for the dirty big AT-AT walker (or as Macintyre calls it "Snowtroopers ice skating on Rayburn rink following the bring down of the rebel snowspeeder"). I would've killed for this in 1983! I will give 1 point to Darren's Blanket. In Spotlight they would call it 'stock', in a gallery you can call it 'art', but at SSFA they will tell you it is 'sold'.  And in a commercial gallery that is all you need to know!

Posted by Big Lamington at 9:13 PM