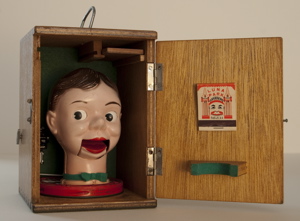 Last day for this show so if you are reading this you've missed it.  And it was pretty good too.  Again with all three junior critics in attendance although this time I think we had red jelly frogs as the bribes.

This show was called 'circus' and I found it on one of those iphone art apps (I use 2, artsguide and artsview sydney, they are both okay in a sense although I reckon there is some better functionality waiting to be developed).  I love the whole circus / fairground / sideshow alley aesthetic and I thought the junior critics would appreciate it as well.  And I was right, but this was also helped by the friendly gallerist kindly dimming the lights and turning the works on!  That's right, most of the works, which were kind of found object sculptural assemblages, were were kinetic in some way or shape.  The most common element was the wind up music box which made the kids dance about and shout the standard chorus of approval ... "again, again".  These were really quite affordable too.  I have misplaced my room sheet but I thinking some of the small ones were in the hundreds and the more elaborate ones were in the low four figures.  It must be my competitive instinct (or budding artist consultant in me) but I always think of what competition I would enter the work I am looking at in.  To me this was a lay down misere for the Woollahra Small Sculpture Prize so I was surprised when I didn't see that on her resume, next year! 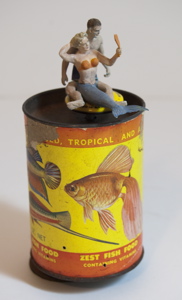 Points:  3 points for 'Misty', I think this was the one in the big old red cast iron letterbox, a real circus feel here.  2 points for 'just for fun', I realise it is a ventriquilost dummy but I kept thinking of the clown game at the show.  I think this is the image that led me to the show.  1 point for one of the old tin music boxes, 'tropical fish' (pictured above), which were great fun.
Posted by Big Lamington at 7:00 PM