Ohnesorge at Pompom and others at MOP - 13 October 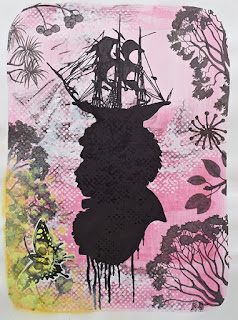 There is a lot to like about MOP and its commercial offshoot Galerie Pompom.  Their web pages are the only things I'd like to see them improve, mainly because I can never seem to find all the images of who they have on show.  This could all be a cunning ploy to increase gallery attendance.  And if it is, it works, as with two of my junior critics in tow we trooped off to get a gander at the works of Nana Ohnesorge, Tiffany Shafran, Maria Gorton, Marisa Purcell and Matthew Allen.

First up was MOP.  I really liked what Tiffany Shafran had on show.  There was a collection of about 30 pieces, each called "Adventure Sampler" with a corresponding number.  To make the room sheet an adventure in itself they were arranged out of order.  Construction wise they were "digital print and embroidery floss on archival paper".  In layman's terms Tiff has got a heap of old found black and white images that are presumably helpfully out of copyright and then punched some tiny holes and embellished the images with some random embroidery.  We all liked them, my 5 year old was liking the beards that had been added to some whilst my 2 year old liked the feather american indian headdresses that had been added to others (Tiffany by way of background grew up in the States but has done her uni work in Australia and is currently completing a PhD at USQ).  These were all quite small and quite affordable at $350 a pop.  Plenty of little black dots up.  Also selling out at MOP was Matthew Allen, although he only had one thing, admittedly a diptych.  This was similar to his work that SSFA has shown, all one colour running into another.  Interesting from a technique standpoint but a little too contemplative for my liking, although I could see it growing on me I think I need works to really grab me.

Next door at Pompom was Nana Ohnesorge latest efforts.  I had seen one of her Ned Kelly's on the cover of an art mag last year so was keen to see more of her work.  I was not to be disappointed, and what a diverse practice.  My junior critics were quite taken by some of the sculptures, including one that was probably a little parental guidance recommended.  There were a couple of Ned Kelly's which were great.  I mean, easily recognisable and iconic due to subject matter, I guess that's why Regan Tamanui also uses him extensively.  I quite liked the colonial themes that this german born artist referenced.  Lionel Bawden (who we would like to have represented in the collection by the way) did the essay for this show and explains it all much cleverer than I will.  I really liked the mixed media approach, her brave use of vibrant colours and some top notch collage work (is it collage month or something? I think nearly every show I have been to in the last month has rocked some collage somewhere).

Points:  I will give 3 points to Nana's 'Trophy (Bennelong)' (pictured at top) which looked great in the gallery.  2 points for the 'Play it your way' which was a fantastic bright collage and a little kitschy. 1 point to Tiffany Shafran for the samplers.  I cannot tell you which number it was but it was one of the two headress ones.  I might have to be back with iphone in hand to record it for posterity.
Posted by Big Lamington at 8:08 PM