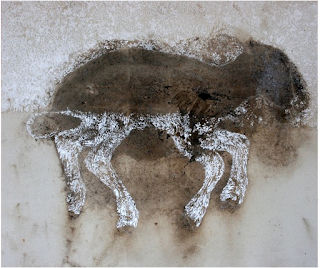 The Blake Prize is the one that gets artists to "investigate ideas and issues surrounding spiritual thought and religion in contemporary art".  Big Lamington was here last year and didn't really feel the spiritual vibe.  Would the move from NAS to the SH Ervin Gallery lead to better things at the Blake?  Let's see ... 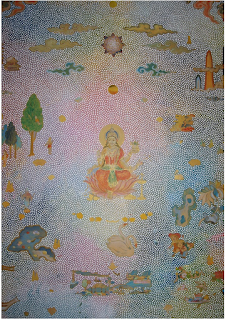 I'm not a huge fan of the venue change.  I don't have anything against the SH Ervin gallery per se, except for it is a real schlep from anywhere in town and they are charging 7 rods for something that was free last year.  And I am not entirely sure it is worth it, you can see the Archibald, Wynne and Sulman for ten bucks so will be interesting to see how many punters they get in.  To me, you will get the folks that buy powerball tickets when the jackpot is "only 3 million", aka the true believers.  Speaking of believing I think it really does matter as to your own faith as to how you interpret the spiritual and religious.  There are some traditional aboriginal dot paintings for instance, that look to me like any other aboriginal works (which is to say I think, oh aboriginal art, rather than oh that's spiritual).  Same with Tim Johnson's tibetan style painting (pictured above, Lakshma) which are more ethnic to me rather than religious.  There was actually quite a lot of buddhist inspired work, mantras, monks and Hyun-Hee Lee's little buddhist prayers that were written on scraps of paper and sewn onto the canvas.  I love Danie Mellor's art and really liked his entry this year, a memento mori called 'Bulluru Storywater' (detail below) which also had these quite good place names all around the drawing that were covered in shells.  Interesting work, and much better in the flesh than online.  I couldn't believe the judges split the honours this year, a bit of a cop out if you ask me.  If I had to choose between Fabian Astore's video and Evelyn Kotai's mantras I probably would've leaned towards the video.  Despite the judges view I thought Stephen Frost's video of New Guinea tribal customs was better but then again I am all over the Free Papua cause.  One of the more spiritual works in my mind was Vanessa Barbay's Lamb of God (pictured top) which was described as a decomposition print involving a stillborn lamb down in the Monaro region of NSW.  To me, that was quite biblical in a "behold the lamb of God who takes away the sin of the world" sense. 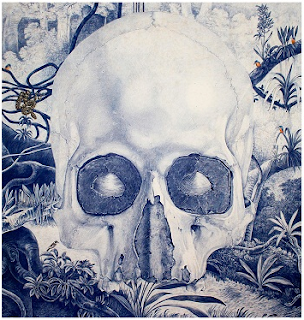 Points:  3 for the Lamb of God, this also got my vote for the people's choice.  2 for Danie Mellor, this was probably my favourite work of contemporary art but I opted for the lamb as it filled the brief better.  Lastly I will give 1 for Tim's Lakshma, great use of colours and technique but I blame those hippy stores like tree of life for commoditising buddhist imagery for me!
Posted by Big Lamington at 4:44 AM