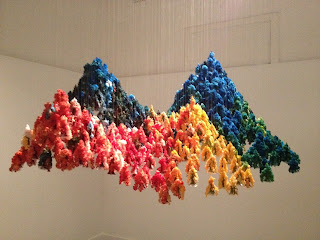 Approaching year end means we start rolling into end of school shows.  First up for the Big Lamington team is the NAS postgraduate show.  This is mainly people doing their BFA Honours year, although there are a handful of MFA candidates.  Let's see what the students have in store ...

One day I will tire of describing an art school show as a mixed bag. But today is not that day. This was even more over all the shop than usual, it doesn't appear that students concentrations matter anymore.  I thought some of the drawing team had some good sculptures, likewise with the painting.  To be honest some printmakers looked like they were drawing.  You get the drift.  The most impressive piece of the night in my mind was Gabrielle Hirst's (from the drawing dept) sculptural installation called "Mnemosyne" (no, you look it up yourself).  This work (pictured at top) was made up of hundreds of those special crystal trees that grow when you add water.  We have had a couple here at home and I can think of a few junior critics who would like to see this. This work is obviously ephemeral but I heard Gabrielle also does photos of these pieces.  And her drawings weren't too bad but even in the drawing area she had a video. Why do they ask people to specify what they are concentrating in nowadays? Also right up there was Nadia Odlum (from painting) who had a lot of these really trippy geometric installations that nearly make you dizzy.  Very good although probably a bugger to live with, despite that I loved that she had a business card out for punters to pick up.  You've got to hustle in this world and we respect that. I am always on the hunt for a possible commission from this show (speaking of which we bumped into NAS alumni Angus Fisher checking out the wares, he has a show at Australian Galleries in the Melbourne in 2013 - always happy to plug an artist in the collection, which is another story in itself but I am getting way off track). Other highlights included Brandon Trakman's street artist style paintings directly on the walls and Amanda Seddon's propaganda pieces.  I liked how both artists incorporate text into their work.  Students love a bit of flesh and Kate Alstergren's subdued palette didn't disappoint with some provocative studies and other highlights included the guy who made the milk crate circle that looked like a low rent stargate (apologies but I forgot to write down your name).  At NAS you do expect to see some great technique on view and I thought Elliot Nimmo was one of the better exponents here. 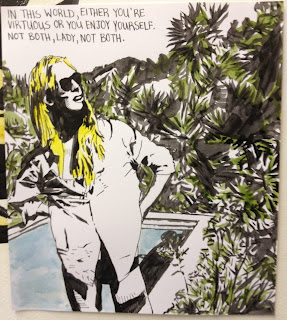 Points:  3 for Gabrielle's crystal trees.  Very clever, miles ahead of the field. 2 for Nadia Odlum's geometric patterns (I could see maybe a flag commission here). 1 point to Brandon for his use of text, a great quote in the above image which was a detail from his main installation work which referenced Ayn Rand quite heavily. Lastly, can someone from NAS hit up Armani (the new sponsor) for more beers at the next opening? I wasn't even able to wet my whistle tonight. Thank you.

Posted by Big Lamington at 3:57 AM