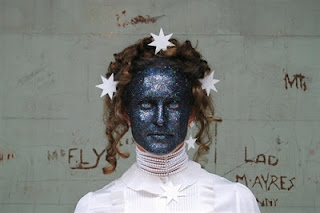 A lovely Tuesday evening weather wise and the senior members of the Big Lamington team were off to visit Carriageworks for a few drinks courtesy of the good folks at Performance Space.  This was the launch of their 2013 season but I was more interested in checking out SEXES their latest exhibition (and yes it is all caps and italics). 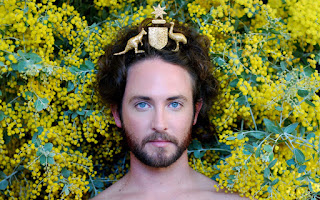 Billed as "a critical survey of recent contemporary Australian art, the project explodes binary notions of gender and sexuality to examine and celebrate a multiplicity of perspectives and practices", I was actually just keen to see a few familiar names.  Liam Benson, Christian Thompson, Tara Gill and Pilar Dupont, Tracey Moffatt and even the Kingpins were some of the big names involved in this project.  I am a big fan of Eric Bridgeman's work although his contribution was a little too Tom of Finland for me this time around.  I liked Cigdem Aydemir's hijab based work, same sensibility as the video work he had at Gaffa recently.  The best stuff for me was hidden away in the room with the warning (despite the fact Eric Bridgeman's work was probably the most explicit and out in the open!).  Top pick here was Liam Benson's photos (top, Glitterface, above Coat of Arms).  These were on topic but in a much more subtle and thoughtful way than a lot of the other entries (which were a little more in your face so to speak).  Also fantastic was Tracey Moffatt and Gary Hillberg's video collaboration called "Other".  Here they have stitched film clips together a la Christian Marclay's Clock but instead of watches the common theme here is all those wistful looks that people give each other in the movies, in particular between races. So Mutiny on the Bounty makes it (and twice, the Marlon Brando and the Anthony Hopkins versions) and a number of other familiar and not so familiar movies (screen shot below).  It is always enjoyable to watch something like that, as you are trying to pick the references.  It was much easier to watch than the Gill / Dupont flick which was much more slower paced (and recognisably 'arty').  Maybe I like my video work more mainstream! 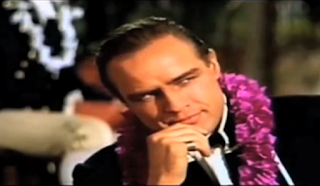 Points:  3 for Liam Benson.  I love the wattle image (we have it in the collection) and I was pretty chuffed to see it stand out so well in this group show.  2 to Tracey and Gary for their video 'collage' and 1 to Christian Thompson.  By the way, I think this is a huge find but 'Other' is on the interwebs so you can watch it at home.  More of this please.  Now if I can only track down that icebreaker video from the biennale ...
Posted by Big Lamington at 2:44 AM