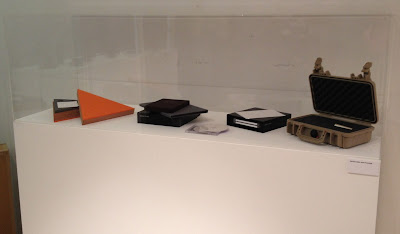 Collector's Space is is a pop-up gallery for Art Month Sydney (at least I assume it is only open during art month) that features works from the collections of six separate collectors (hence, Collector's Space). I'm in a rush so I am just going to dive straight in ... 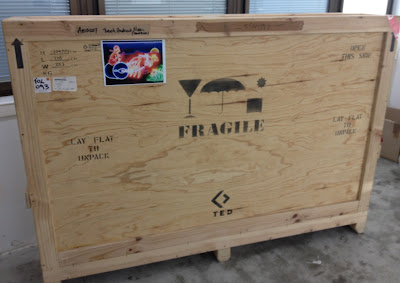 As you would expect this was all over the shop.  Works from Clinton Ng's collection are on the ground floor (he owns the building so probably got first dibs on the floor) and there was a great Shaun Gladwell photo, a Daniel Boyd that I had seen at the MCA still in bubble wrap and with the label on (pictured below), a partially unpacked Alexander Seton marble sculpture that I saw at SSFA not so long ago and a Brook Andrew neon work in the box (pictured above) along with a fantastic little Lionel Bawden pencil work.  This was a great start to the show but it also ended up being in my opinion the strongest of all the mini-collections.  I would've happily taken virtually any piece from Clinton. 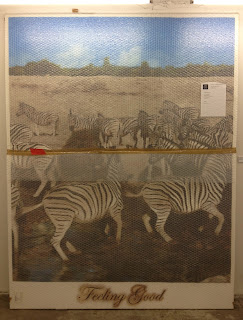 Upstairs is an "emerging collector", an "anonymous" collector, Pat Corrigan and Michael Hobbs.  I was interested to see what an emerging collector buys but  I think some of this was gifted which is cheating a little bit, although I was also a little relieved she hadn't spent her money for the Jasper Knight (I think once you start getting advertised in those 'investment art auctions' in the Sunday tele then you are officially overexposed).  My favourite was the "anonymous" collector.  In a sense it was a shame that this lawyer turned mother (there was a bio) decided to stay unknown but my respect for her grew vastly because of it.  There were some interesting artworks here, my favourites were the video works - but specifically the packaging which had been arranged in a glass box so that it became the art instead of the video (pictured top).  It was amazing to see the variation in how artists package up their video art - it reminded me in a way of the Christmas artist multiples that I used to collect from the Peter Norton foundation.  Anonymous had also gone in for the art in the box, leaving a Hany Armanious sitting inside a pine box (well, it is meant to be in there, but it might've just been the box! this is a great idea and I might just start collecting pine boxes and putting labels on them, see below for the sticker you will need!).  There was also a great little Michael Parekowhai (and I can pronounce that, remember I spent 6 months in NZ bro!) taxidermy sculpture for the eagle eyed viewer.  Down in the basement was some of Dick Quan's collection.  But first extracts from his bio ... "Dick Quan was born to collect, and to collect well ... Dick Quan's fearless intellect, natural instincts and honed eye lead him to acquire works by artists that are virtually unknown - but not for long".  Puh-lease.  I also saw Dick speak on the Wednesday night which confirmed to me that Dick's intellect is perhaps exceeded by Dick's fearless ego.  I realise this may seem a little hypocritical given I have a healthy respect for my own opinion but then again I have not commissioned a portrait of myself and then lent that to a gallery for art month ... yet!! 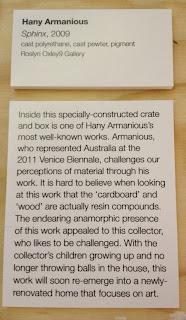 Overall a good little outing.  What I liked most was how a few collectors had left things in the box or partially wrapped.  It does take me some time to unwrap things at home and I admit to leaving a small work on display in the bubble wrap it came in.  I also liked how they had also shown another aspect of what they collect, be they cars or wedgewood.  I did feel a kinship with some of these collectors, I know I was born to collect and have the 500 phantom comics in the attic to prove it (any reasonable offers considered)!

Points:  3 for Anonymous' collection of video works.  2 for Daniel Boyd in bubble wrap and 1 for the Hany Armonius in the box!

Posted by Big Lamington at 3:38 AM