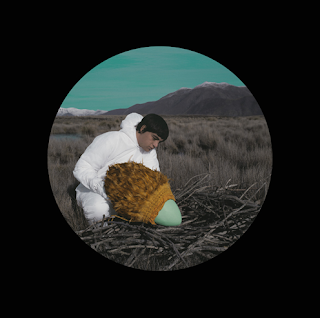 So I was actually on my way back from day 1 of the Easter Show and needed to drop some showbags off to my nieces which meant Rozelle art month night was now en route home.  Being a big fan of Artereal and hearing rumours of possible Liam Benson sightings I decided to pop in looking decidedly out of place in my shorts. 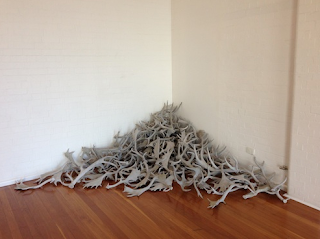 And thankful I am that I did as I was very impressed with the exhibition of Hayden Fowler's new work.  It was very trippy and in a way kind of reminded me of early episodes of that tv show Lost.  Maybe it was the white tyvek suit.  I did like the background and did manage to guess it was kiwi land (which again is what gives it an air of foreigness to an Australian audience).  This is when you need to know a bit of the backstory.  He is using the allegory of the Moa, which apart from being a boutique NZ beer was also a flightless bird bigger than the emu which was hunted to extinction by the maori (although just like the tassie tiger there are a couple of true believers who think it is living somewhere remote, like Dunedin).  I don't know if he is suggesting bringing it back with technology or some such but the detail didn't really matter as I quite liked the aesthetics of these photos.  New Romantic II (pictured top) shows a maori with a traditional feather cape looking after a big blue egg which nearly matches the sky in colour.  I quite like how the prints look as a circle in a black square.  Nice touch.  I would definitely get one if I could handle editions of 5 being priced at 2.5k for an unframed print but then again that is probably me just not getting with the program of how photography is priced these days (indeed Michael Reid reckons photography is a complete bargain but then again he is selling it!).  I also liked his pile of antlers in the corner (called Heap, photo above).  These were made of cement but reminded me of the Marc Swanson crystal encrusted antlers he did for the Peter Norton Christmas project in 2009.   Apparently the MCA ambassadors will visit his studio soon.  Sign me up.

Points:  3 for New Romantic II and 2 for New Romantic III.  The mathematicians out there may see a pattern there although I am now going to break it by giving 1 point to Heap.  Sadly like the Moa there were no Liam Benson sightings (he was actually doing a performance in the grounds at SCA and I didn't see him there either) although Artereal have a heap of postcards of his with the great coat of arms image so I consoled myself with a couple of those.
Posted by Big Lamington at 5:35 AM