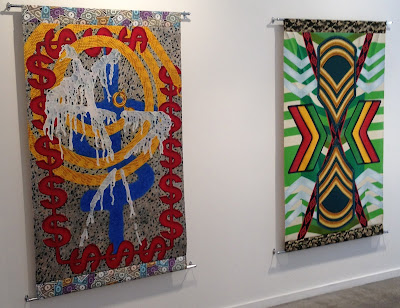 Given these spaces are adjacent it just makes sense to put them both in the same post.  I mean does anyone out there go to one and not the other?  Today I had 2 of my junior critics along for the ride so these were pretty quickish visits.  Just long enough to get a good squiz at everything and say 'no touching' 5 times.

First up was MOP.  I really liked Tully Moore's canvas pennants (at least I would call them pennants, they aren't framed and are stretched like on an Obeid smart pole!).  These were all oil on canvas but to the naked eye looked like a mainly custom fabric although I gather that was the aim (above left '$$Bills' and right 'Chevron' all 180 x 107cm and $3.4k).  Indeed the website says this body of work "looks at how such material links to how we perceive ourselves through branding or patterning, whether that be through a form of camouflage or to use to design to create motif's that link oneself to a particular movement or status".  I think Tully has me nailed as a white rasta because I do love red, gold and green together (as Boy George says 'loving would be easy if your colours were like my dream').  MOP usually has some more experimental work and Deb Mansfield does the honours today.  This collection of work incorporates 'photographic-tapestry' that is upholstered onto a reproduction Louis settee and is meant to symbolise how armchair travellers like remote places.  I have deliberately not included a photo as I want you to imagine what that might look like and then go to MOPs web page to check it out.

Next door at pompom Nicola Smith has pumped out quite a deliberately repetitive set of paintings that take their reference from cinema.  What I like about pompom is that they include a little essay to help you understand the work, if you can understand the essay that is, which I didn't really. I do understand obsession and I appreciate Nicola has been inspired by the same cinematic references for quite a while - I mean my college mates and I still quote Caddyshack ad nauseum after nearly 20 years - I just don't get how she was inspired by such obscure works like Les Enfants du Paradis (1945), The General (1926) or Numance (1937).  Click here to see the images.

Points:  3 for Moore's 'Chevron', I really don't care what I was supposed to feel, but I was feeling Bob Marley.  And Bob is always going to take the 3 points. 2 for Mansfield's 'the armchair traveller' and 1 point awarded jointly by my 5 year old and 2 year old to Smith's 'Jean-Louis Barrault's 1937 production of Cervantes' Numance (1582) with masks by Andre Masson, I'.
Posted by Big Lamington at 6:30 AM