Roger Shimomura at Flomenhaft Gallery - 22 May 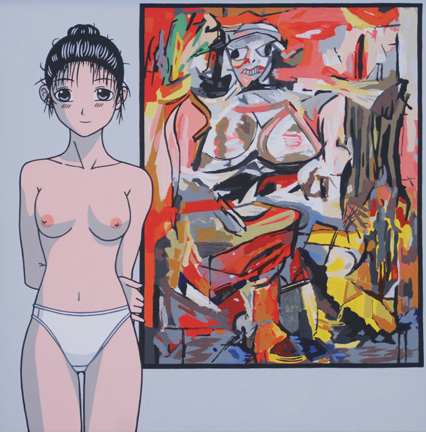 The Big Lamington wasn't just hitting the big names during my afternoon in Chelsea.  The smaller galleries featured prominently.  The great thing about Chelsea is you get these converted factories which have a rabbit warren of smaller galleries on the upper floors.  547 West 27th is one such building.  It is home to the Aperture Gallery (the big photography organisation) and I remember it having a great selection of galleries focused on emerging artists back in the day.  Sadly one of my old favourites Foley Gallery had left the building (and I didn't manage to track it down in its new location) but I stopped by Flomenhaft for what looked like a Japanese take on Pop! 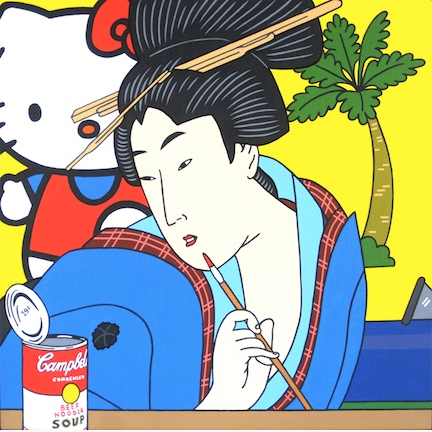 Turns out Roger Shimomura is a bit of an old stager.  This guy (born 1939 and still going) has had over 130 solo shows.  His personal papers and letters are being collected by the Archives of American Art and the Smithsonian.  And his series of 32 'Great Ameican Muses', mostly 60 x 60cm, are only $8k a throw.  Sounds like a steal.  I couldn't resist a little bit of risque Japanese anime for the blog (#14 top, this was one of the first 3 works sold, great taste me).  The junior critics would've liked the Hello Kitty crossed Warhol of #26 below.  I kind've liked how he treated the taxonomy like a cheap asian takeaway!  I probably would've ordered #'s 19, 8 and 24 as well.  See here for more on Roger and here for the days points.
Posted by Big Lamington at 6:40 PM